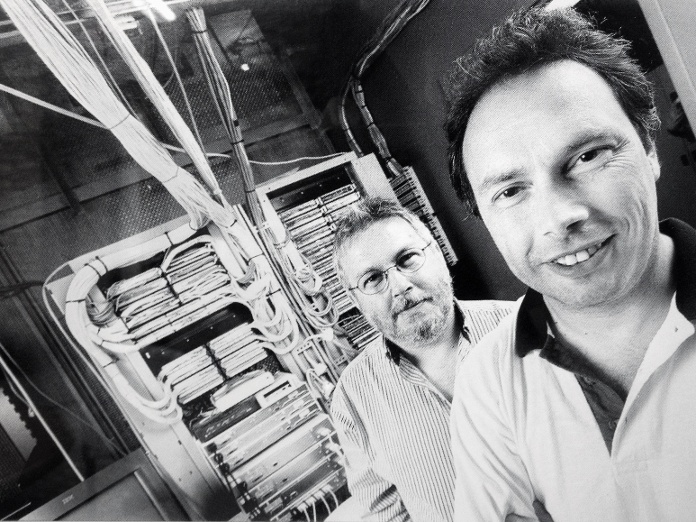 Pivot is a word that tends to be thrown around. You might have heard it in an infamous Friends episode, in basketball and, more recently, in the startup world.

Our Managing Partner Mark Skapinker is no stranger to the term. Like many experienced VCs, Mark started his career on the other side of the table as an entrepreneur in the ‘80s. He was the bright mind behind Delrina—a Canadian tech darling that created over 800 jobs and sold to Symantec for $500M in 1995.

I sat down with Mark to get his understanding of the “startup pivot” and it brought us on a trip into the late 80s when WinFax - Delrina’s pet product - was only a concept in the making.

Epitome of a Pivot and the Birth of WinFax

Delrina started much like many startups still do today – on a mission to revolutionize an industry. The Toronto company, with Mark and his partners at its head, believed that online requisition business-forms were the future and that they could disrupt not just Moore Business Forms, a giant at the time, but the whole forms industry with their cleverly-named product PerForm.

While Delrina’s PerForm did find some success, it was progressive; not disruptive, and they struggled to achieve massive growth even though they led the market. It wasn’t until the company pivoted into what the market really wanted, a solution in the guise of WinFax, that they would take the tech market by storm.

In 1989, Tony Davis joined Delrina’s product team on a recommendation from a colleague. Tony was an incredibly skilled developer, and he started working on a solution in his spare time that would allow fax documents to be sent directly from a computer – a very edgy idea at the time. By 1990, a (very) early version of WinFax made its way to a small table in a Delrina booth at the Las Vegas COMDEX convention. What happens next is the stuff startup legends are made of, but Mark assures me that this all really happened.

By the end of the convention’s first day, Mark and his team noticed that the crowds had mostly formed around the WinFax table, with moderate attention to PerForm. That evening, Mark scolded his team and reiterated that WinFax was still in a prototype stage, that it shouldn’t really be pitched, and that they should focus on selling PerForm. Despite their best efforts, by day two crowds over 30 people deep were continuously drawn to the small WinFax table. After adding a second table on day three to accommodate the massive interest, the WinFax product was the talk of the convention. Most of Delrina’s team had to move over to the WinFax table in order to answer all the questions coming in!

That evening, Mark held an emergency team meeting. He decided to turn the tables (excuse the pun) and repurpose the entire Delrina booth to only pitch WinFax. By the end of the convention’s last 2 days, it appeared that the entire convention was raving about WinFax, and the need for a pivot was clear.

The rest is history. WinFax grew to over $150m annualized sales with 40 million copies sold.

So, When Do You Make the Pivot?

In WinFax’s case, the customer demand was a clear driver, but it’s not always obvious for companies to know where to pivot — or “zig and zag”, as they used to say in Delrina times. As Mark likes to put it:

“The thing that should keep you up most at night is: What don’t I know?”

It all comes down to being able to test the right things, in different ways, in order to measure where your decisions can have the most impact. Mark’s key formula is: test, prove, scale. The biggest advantage startups have is their ability to pivot and test markets in ways larger competitors can’t, due to their size and bureaucracy.

Mark’s decision to pivot from PerForm to WinFax was only one of many zigs and zags in his journey at Delrina. There were many less obvious tests, from freemium models to shifts into OEM, but the key factor of the company’s success is that the results were always measured. Once the test proved out, then it was time to make a move.

The test, prove, scale model is one of Mark’s central tenets and has been the driving force behind everything in his career, both as an entrepreneur and a VC. Whether it’s the Brightspark model, our marketing strategy or in a board capacity, he shares this principle with his team so we’re always ready to zig-zag into new directions.

In our next edition of Inside the Mind, we’ll dive into some of Mark’s favourite examples of pivots in today’s startups and how one of our portfolio companies used the same mindset to shine in its own segment.

Want to keep up-to-date with the latest Brightspark Deals, VC News, and get first-looks into exclusive webinars, guides and tips?  Our blog only publishes a small fraction of what we share with our members/readers.

Don't miss a single beat, sign up to our newsletter! It's the best way to keep in touch with us and the best way for you to stay on top of what's happening in Canadian Venture Capital.

Brightspark State of Mind - Episode 2: The Ups and Downs of Startup Investing